Once the ink dries, the orders are sent off to the Finishing Department, where ribbons are hand-tied, envelopes are lined, and cards are duplexed (a process that involves affixing a smaller sized paper stock atop a larger sized paper stock to create a layered look). 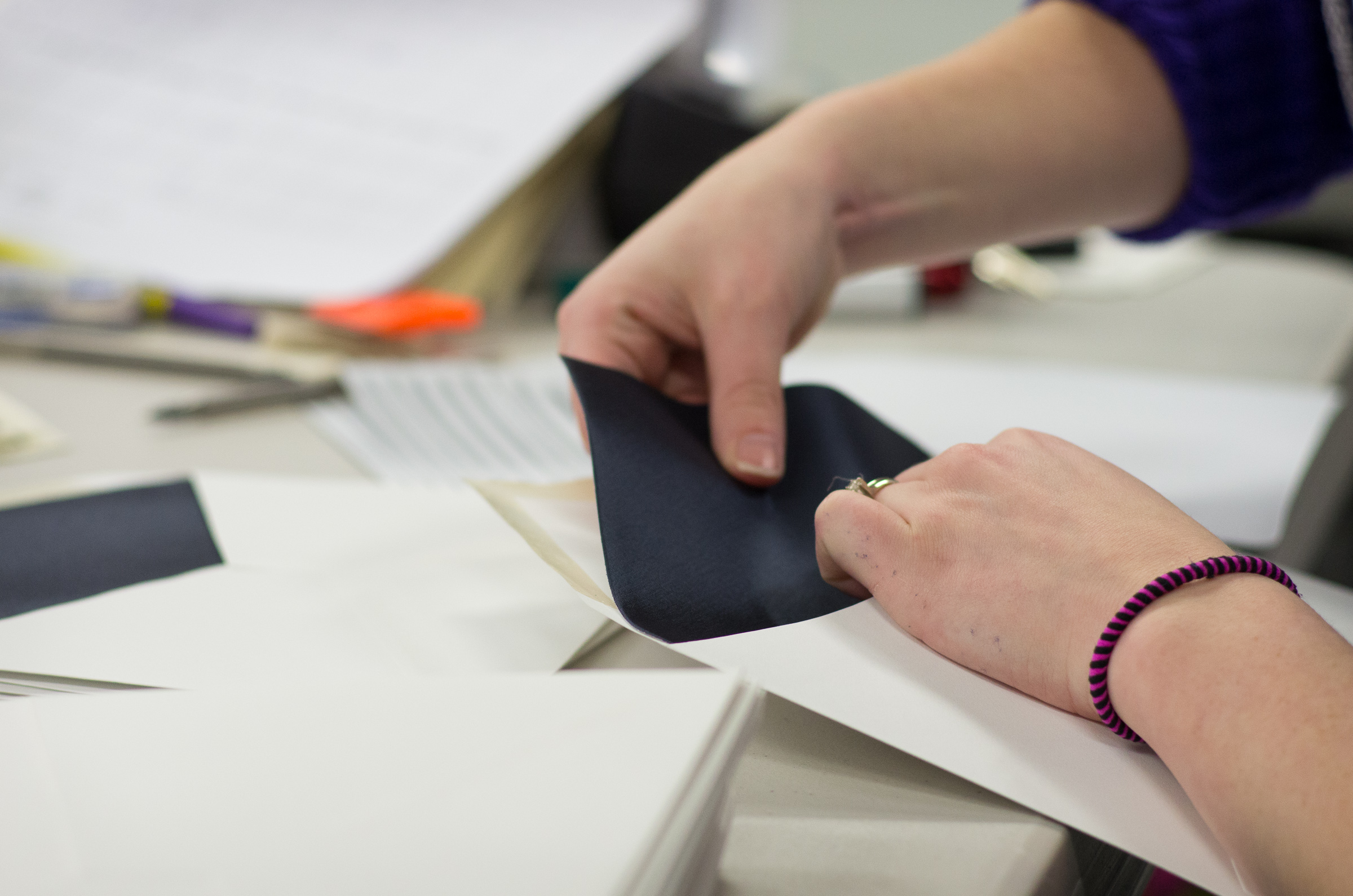 Below, we talked with the women in Finishing — who work hard to make sure every detail is just so — about Presidential inaugurations, letters from loved ones and brand new puppies. 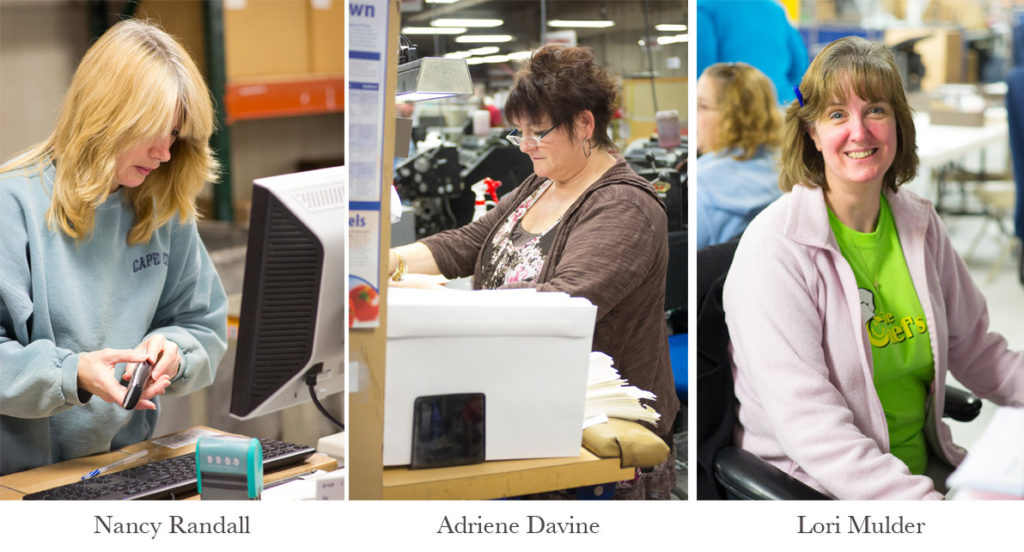 Tell me about how you ended up at Crane.
Nancy Randall:  started working for Crane when I was 20 years old. I had worked in retail previously but I like the work schedule Crane offered and the pay was better than retail.

Adriene Davine: I came to Crane out of high school.

Lori Mulder: My husband worked at Crane and encouraged me to apply.

Tell me what a typical day is like in the Finishing Department.
LM: Busy.

What is your favorite part of the job?
NR: Tying ribbons. 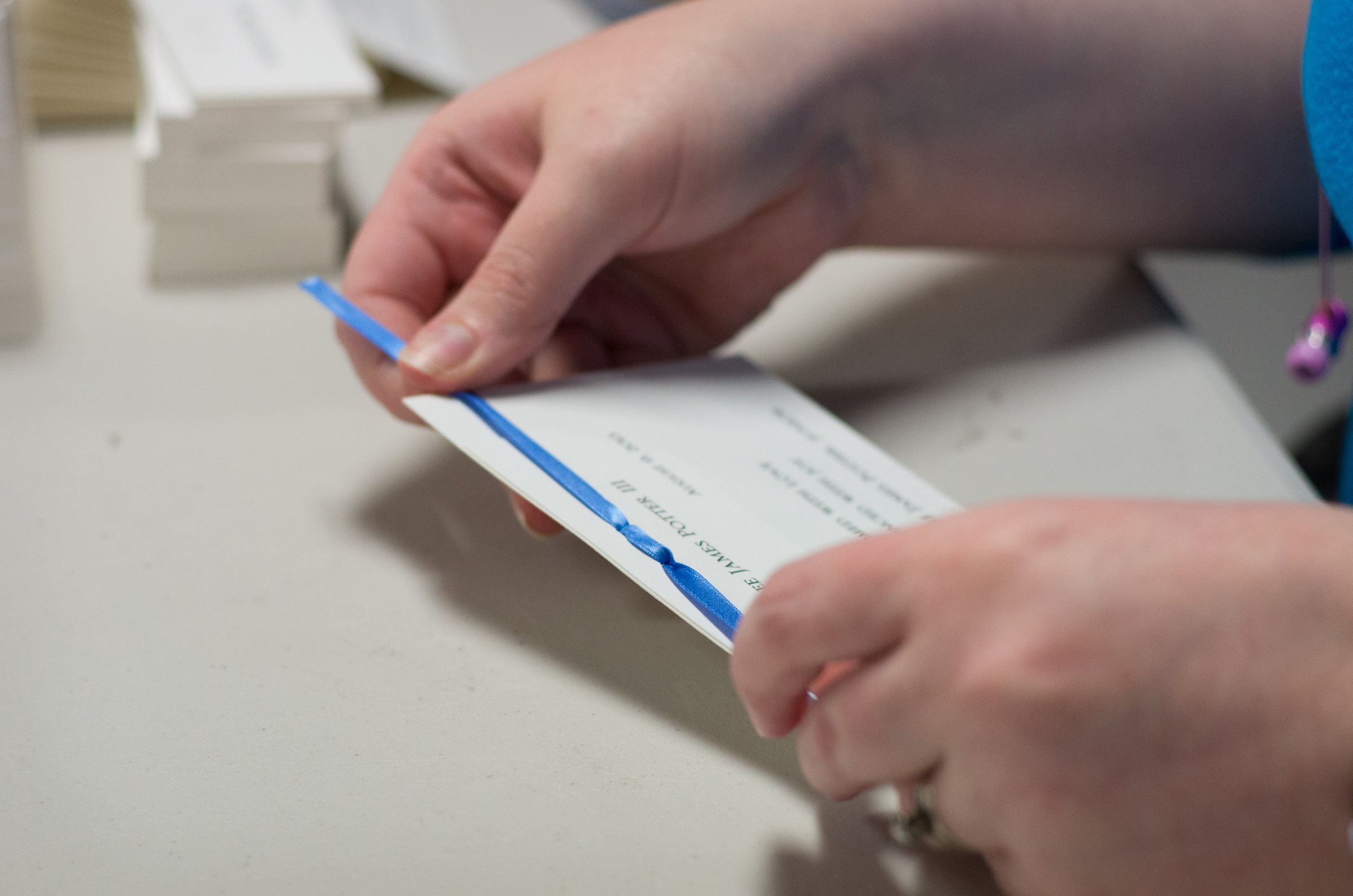 AD: Making sure the order is correct and watching what people order.

LM: Working with my co-workers — they are a great group of people.

And the most challenging?
NR: Duplexing* a card that has a ribbon around it. It is more difficult to keep it consistent. 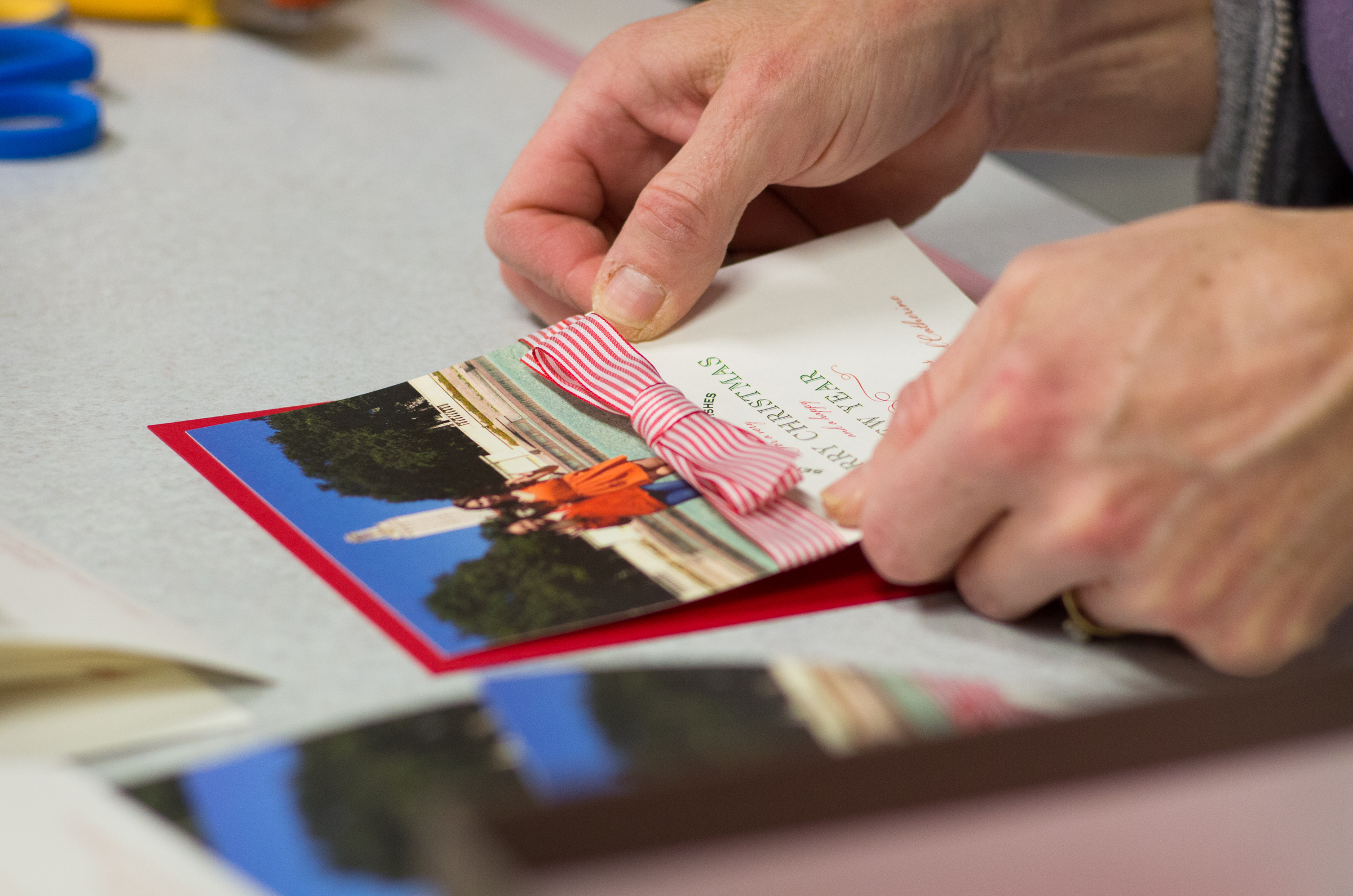 LM: Hitting the deadline to ship at 6 p.m. Most orders are time sensitive and need to ship the same day that the order arrived in Assembly.

Describe the most elaborate job you have ever had to work on.
NR: A wedding invitation with the invitation card being duplexed after having a ribbon wrapped around it and the base card was an engraved folder.

LM: A bat mitzvah. We had a program with seven inserts and furnished ribbon. We have to collate on two long tables to make sure that every page was correct. The customer wanted two pieces of the ribbon tied at once with the narrow ribbon on top and wide chiffon on the bottom, then had to twist and turn the ribbon in order for everything to be the same.

What are you doing when you are not at Crane?
NR: I spend time with my daughters and granddaughters, I attend a fitness class, go out with friends and take walks.

AD: Taking care of my puppy.

AD: How religious I am.

LM: I collect statues and pictures of the Blessed Mother.

Tell me about the most memorable letter you’ve ever received?
NR: From my youngest daughter when she was at boot camp for the Air Force. She didn’t have a lot of time to write but she tried to put as much as she could explain quickly about how things were there and re-assuring me that she was okay.

AD: From an old boyfriend that I met on cruise ship.

LM: When I was a teenager, my brother joined the Navy and was stationed in Italy. I loved his letters telling me about his adventures and the people he met there. This was back in the 80’s when cell phones were not invented yet.

All photos taken by the wonderfully talented Dan Morgan. 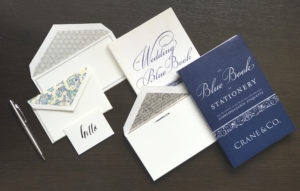 A Jack of All Trades – And Master of Many 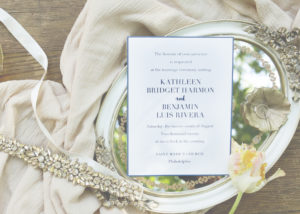 A Wedding Collection with a Story

How To Write the Perfect Summer Camp Letter