We received an email with the subject “A special request.” It was from a woman named Jana about her mother-in-law, an avid letter writer named Annabelle.

“One of her best traits,” Jana wrote, “is how beautifully she writes—not books or articles (although she probably could do that, too), but rather letters, note cards and thank you notes.”

Annabelle, Jana added, is also a big fan of our stationery.

“When I married her son, she gifted me with boxes and boxes of your notes embossed with my new monogram (complete with the copper plate), and she has passed along to each of her children and grandchildren the importance of putting pen to (Crane) paper to keep in touch.”

The reason she was emailing, she continued, was because Annabelle was turning 80 years old soon.

“It would tickle her to death to receive a letter from someone at Crane for her birthday—would this be possible?”

Well, of course it was! Our president, Katie Lacey, took pen to paper without hesitation, wishing Annabelle a very happy 80th birthday and thanking her for using our stationery. We also sent along stationery to add to what we’re sure is a very impressive stationery wardrobe. It was the least we could do for a customer as loyal as Annabelle.

Annabelle, opening the letter and box of stationery on her birthday.

We always say that the legacy of our stationery is passed down from generation to generation, and it’s people like Annabelle and Jana who prove that idea. It’s the reason we have prided ourselves on our impeccable craftsmanship since 1801, knowing that a love for classic correspondence is alive and well. 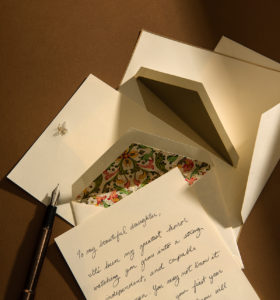 Why Write a Letter to Your Future Self