Writing by hand, research has shown1 , can help us remember things. But more importantly, handwriting is uniquely personal and intimate. You can know someone for years and yet still be surprised when stumbling upon their handwriting in a letter or note. Whether it’s messy or neat, sprawling or compact, a person’s handwriting offers you a fresh glimpse of who they are.

I lead the company that has produced stationery for more than 200 years, but my appreciation of handwriting was born long before this career of mine began. It started with my own mother, who during my college years, would mail me letters every week, updating me on her life. The details she shared were rather mundane but each letter brimmed with her singular humor, made all the more tangible by her nearly illegible script. Today, I have giant bins of her letters — every single one — and I’ll never throw them out. When I miss her, rereading something that she wrote brings her back more vividly than a photograph does. In this case, I’ll take a thousand words over a picture.

What is it about handwritten messages that prompt us to savor them so? To save them in fat file folders and keepsake boxes? To ascribe to them an emotional resonance that you’d never give to an email or a text message?

John Coleman, the co-author of the book, Passion & Purpose: Stories from the Best and Brightest Young Business Leaders, provided an explanation in a 2013 piece for the Harvard Business Review2. He wrote:

Handwritten notes are unusual. They take minutes (or hours) to draft, each word carefully chosen with no “undo” or “autocorrect” to fall back on. Drafting one involves selecting stationery, paying for stamps, and visiting a mailbox. They indicate investment, and that very costliness indicates value.

Coleman also noted that handwritten notes tend to be good for business, sharing the story of Joe Girard, a car salesman so successful he holds the record for most car sales in a single year, according to Guinness World Records3. Girard cited handwritten notes as one of his keys to establishing client loyalty.

I’ve seen the impact of handwritten notes in my own professional life. In the course of my career, I’ve been fortunate to work with accomplished people who took time out of their day to pass on short, encouraging messages — ones that, like my mother’s letters, I’ve also saved. My favorite came from the late Alan Pottasch, the famous advertising executive. When Alan and I worked at the same company years ago, he sent me a note praising my work on an ad campaign for a new beverage product. I was still fairly new to the company at the time, and Alan’s note made me feel like I had done something right. And seeing his words on paper also made it easier for me to imagine him as a human, a real person, not just a legend. He later became a good friend.

I try following the example that he and others set today. I make time for handwritten notes even when an email would be faster, more convenient. I want my colleagues and clients to experience a human connection with me, too… and I’m not alone. Even the digital natives of the world find value in handwriting: through our research, we’ve found that young people today see handwritten notes as a unique way to express themselves. They savor handwriting’s retro feel, much like they value vinyl records and Polaroid pictures. All these tangible things offer multisensory experiences that can’t be duplicated by something that appears only on a screen.

That’s not to say that Crane is continuing business as usual in an era of digitization. We may be a two-century old company, but we’re not set in our ways. We know that paper notes and letters won’t ever compete with the efficiency of digital communication, so our aim is to help humans reconnect on a personal level when lightning speed isn’t required.

We also recognize that as much as people appreciate handwriting, they’re less likely today to sit down and pen 1,000-word letters to long-distance loves or dear friends. Keeping this in mind, we’re creating products that make handwriting more accessible to contemporary consumers, such as small packages of cards that consumers can use to pass on notes as simple as “Have a nice day” or cards that are sold pre-stamped and ready to go.

Sometimes it doesn’t matter what you write or how much you write. What matters is that you made the effort to write something at all — that you chose paper, found a pen and put something out into the world that can’t be erased with the click of a keyboard. It makes you stand out, creates a real human connection and ultimately it’s that effort that people remember. 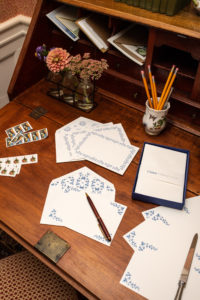