Meet Michael McGettigan and Nestor Torres, founders of Publetters. The name suggests exactly what one might think: letter writing while enjoying a pint (or two). Here, the two share their thoughts on a certain cherished letter to a Philadelphia policeman, bi-lingual correspondence and the wonderful moment that is “the turn.” 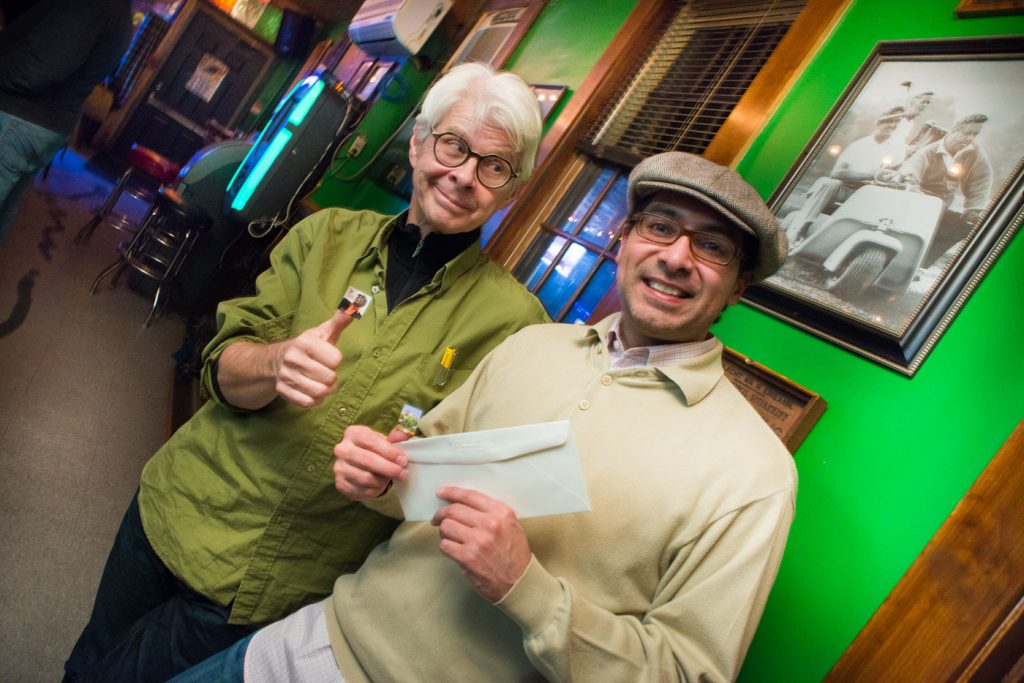 When did your interest in the epistolary world begin?
Michael: Oh, we’ve written letters since grade school in my family—not a lot, but regularly. In the past ten years, as email has become just like another task, letters have become special again for me and for the people I write to.

How did Publetters come to be and why do you think so many are jazzed about participating?
Michael: Really, I was just blue-sky chatting with a good friend at her classic Philly corner bar, Doobies. A couple of ales in, I suggested, “What about a letter-writing evening series?” Patti said, “Great!” I talked to Nestor and Cecelia at Casa Papel, the stationery store near Trophy Bikes, my shop. They totally got it, the local newspapers wrote a nice story during our first month and we were off to the races. 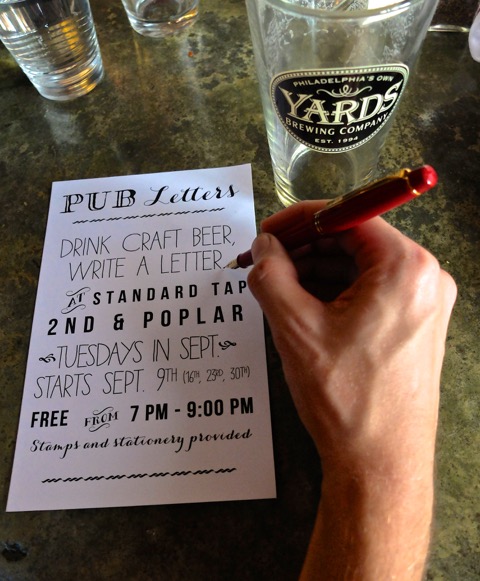 I think people like Publetters because we’re all spending too much time in the digital world. In a bar, drinking actual beer, not virtual beer, you really can slow down and think about your friends and family. Scratching out a letter, maybe doodling something on the page, too, is really satisfying, much more so than tapping on a little piece of plastic. 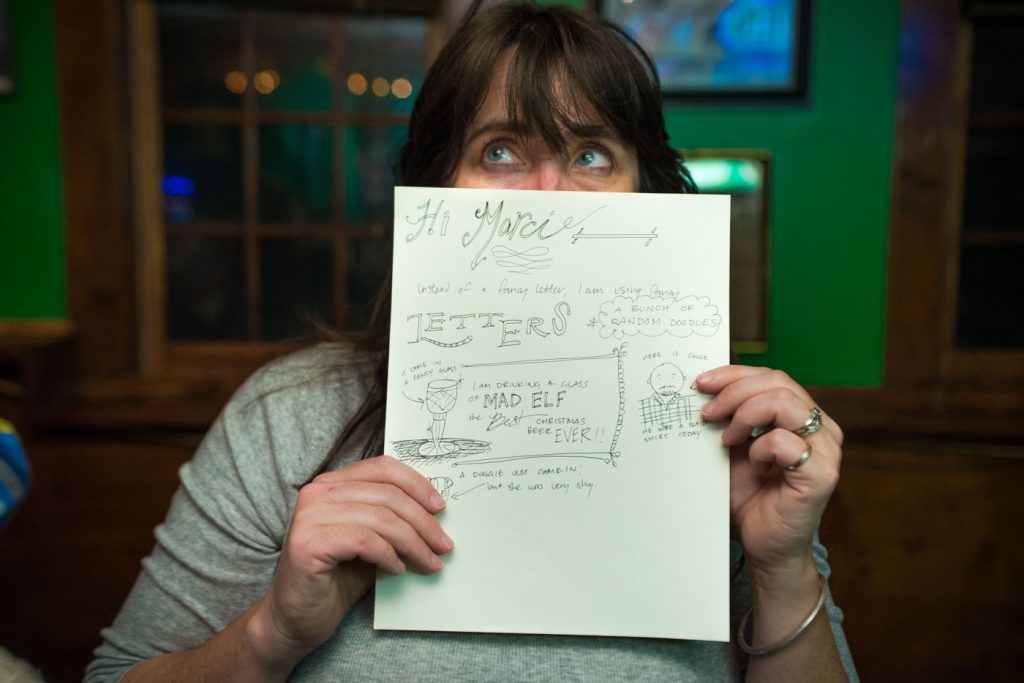 Nestor: After hearing the concept from Michael, we understood the attractiveness of Publetters to our customer base, which really enjoys fine paper and bespoke stationery. People are excited because it’s a grass roots thing; it brings local pubs together with a custom stationer, and the quality product causes a tactile and multi-sensory experience.

What do you enjoy most about the event?
Michael: At the end of the evening, we count the letters and note some of the places they’re headed—and it’s like, Wow: Belfast, Ireland, New Orleans, Rome, London, L.A. then little places like Goose Creek, SC or Coal County, PA, and then next I’ll spot an address just a block from our pub. 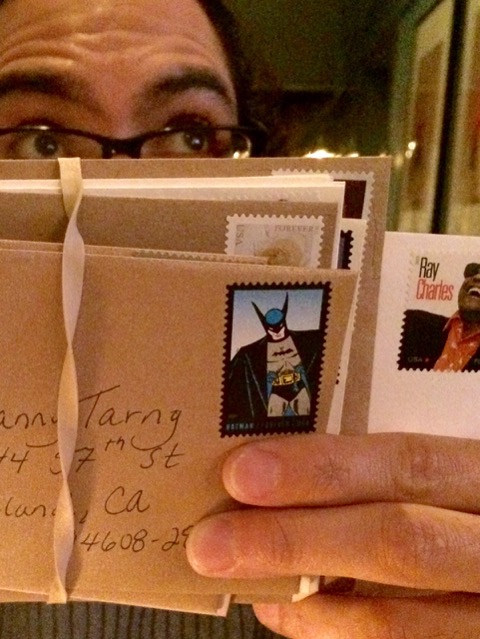 Nestor, owner of Casa Papel, with a stack of letters, ready to go.

Nestor: For me, it’s seeing everyone with their heads down, getting their words out on paper, and having this worthwhile experience, both visually and physically.

What is your favorite step in the process of written correspondence?
Michael: I call it “the turn.” That’s the place in a letter where you get past the “Hey how are you?” easy stuff and really say what you mean, ask them a hard question or make a joke, or mention something that’s special between you and the person you’re writing to. If I phrase that part wrong, I will often start the whole page over.

Nestor: “The Point”—where you stop the introductions and you reveal your reason for corresponding.

If you could be pen pals with anyone in history, to whom would you write and what would you say?
Michael: Oh, Ben Franklin—hands down—just to get his inside take on the rest of the Signers of the Declaration, and maybe some racy stories about his nightlife!

To whom do you most often write?
Michael: I would say that it’s a tie between my youngest sister, who lives pretty far away, and my mom—she’s 95 and not too fond of computers.

Nestor: My son, who just finds it so amazing to be receiving something addressed to him.

Describe the most memorable letter or postcard you have ever received.
Michael: Well, that letter wasn’t sent to me, exactly. It is one that my dad wrote to the Philadelphia Police Commissioner. In it, he conveyed his gratitude to the officer who rushed my mom in a patrol car to the hospital, where I was born shortly afterward!

Nestor: Receiving a special handmade card from my wife. She used a Japanese linen stock that mirrored the fine fabric and placed on it paper flowers.

What makes a particular letter stand out from a stack of cards?
Nestor: The composition of the actual substrate which the ink is marked upon, coupled with the coordination of additional elements that demand attention—liners, surface texture and so on—this all captures the eye.

Do you have a favorite stamp or stamp series?
Nestor: The Farmers’ Market series. That really gives me a sense of originality.

Michael: I like the musician series featuring Ray Charles, Jimi Hendrix, Johnny Cash and Janis Joplin. Really good artwork that connects me with my misspent youth, which included seeing Jimi Hendrix as a teenager. 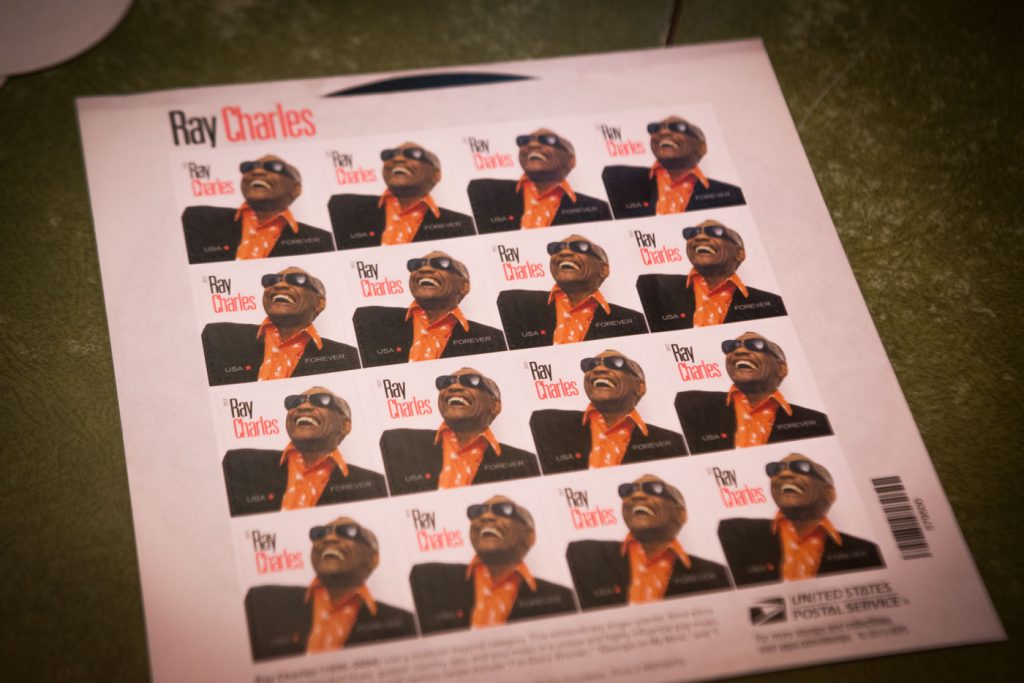 What makes your correspondence distinct?
Nestor: My mixed use of English, Spanish, cursive and non-cursive handwriting.

Michael: Truthfully, a lot of cross-outs! I use a fountain pen and tend to rush sometimes. I’m also fond of footnotes. It’s probably the influence of my spouse Kathy—a book editor for the Philadelphia Museum of Art.

Michael: Millennials will start experimenting with home laser cutting to put their signatures on stationery; we’re already seeing the revival of fountain pens for cursive—“artisanal” writing, you could call it! And as the “maker” trend expands, younger correspondents will look to their local shops for wilder handmade papers and inspirations. Japan and Spain are a big influence already in this, producing small-batch envelope and stationery sets. 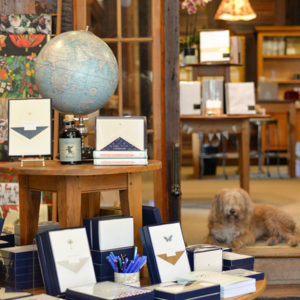 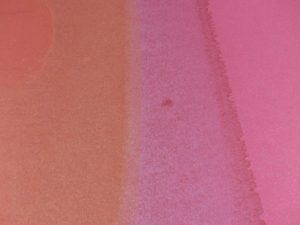 An Artist Uses Our Lettra as Her Canvas