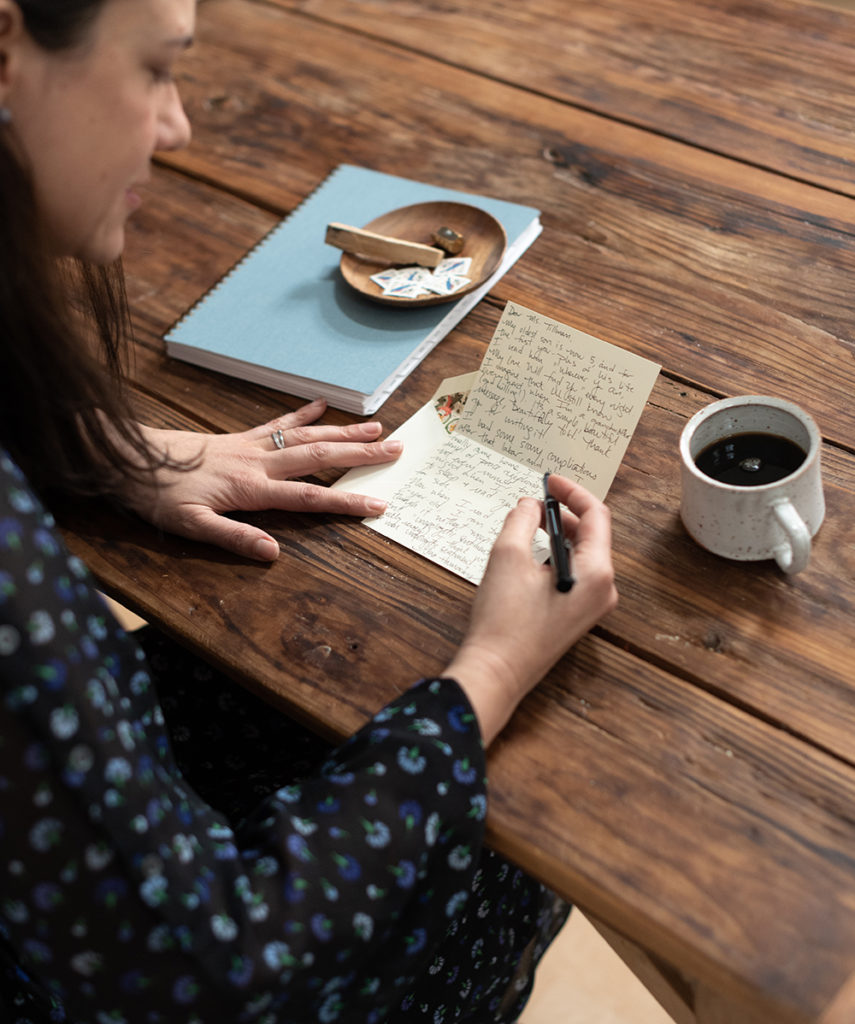 Out of the gates, we knew Gina Hamadey’s Thank You Year was a story worth passing along. The premise is simple: Write one thank you note for every day of the year. But what Gina discovered as her pen hit paper, is that the act of considering even one reason why she’s thankful for a person and then taking a few minutes to communicate that in a thoughtful way, had an effect she wasn’t quite anticipating.

It’s no small feat, Gina—an entire year of thank you letters! What compelled you to start?

The idea came from a very true place of solving a problem. I was riding the train to work every day and filling that small bit of free time toying with social media feeds. I was either scrolling Instagram admiring other people’s stuff or on Facebook feeling enraged. Nothing good was coming out of it. I wanted to change that. I wanted to find an antidote. So instead of spending my limited free time admiring other people’s lives on social media, I get to honor what I do have. And the memories I have.

You’ve described writing these letters as therapeutic. How does saying “thank you” do that depth of work?

There’s a kind of thank you note people are familiar with—thanking someone for a gift they gave you. A confirmation of gift receipt, really. What I’m trying to do is something different: it’s revisiting a memory. Thanking someone for something they’ve said or done. This comes from a very different place, and it’s a lot more interesting to write and read. I find it to be therapeutic because it’s a purely positive experience. Writing a thank you, focusing on another person instead of myself, and making a sincere human connection puts me in a better mood—and that mood will carry me through the day!

Could you give us some tips on how to write a good thank you?

Being specific is what makes a good letter work. For example, my son just turned two and I wanted to thank our doctor who delivered him. Instead of a generic, “Thanks, you’re the best!” I told him it was Charlie’s second birthday and then thanked him for being so utterly excited in the delivery room that day—and how his personality made our whole experience better. Generally, I recommend you start by thinking of just one thing to thank a person for. One thing they said. One thing a person did…or an experience you two shared…and that’s what you hang your hat on. Focus for a few minutes and remind yourself it doesn’t need to be perfect or eloquent, just sincere. Then go for it.

It’s one of my favorite parts—overcoming that squirmy feeling and coming out brave on the other side.

So, who are you writing these 365 letters to?

Every month, I give myself a theme of recipients. For example, “neighbors who have gone above and beyond,” “health professionals,” “food and restaurants I love.” I’ve thanked doulas, career mentors, banana bread makers, my husband. I use these themes to create parameters so I’m not overwhelmed by a stack of blank cards.

Have you ever gotten stuck?

Yes…When I chose “friends” as my monthly theme, it was hard to find a place to start. What friends should I choose and what specific thing could I thank them for? I ended up pulling out a shoebox of old photographs and had the idea to use those photos as postcards—thanking the friends captured in the images for what we shared at the time. It was so much fun to write those.

After nearly a year of writing letters, do any stand out?

You know, one that stands out was writing to my childhood best friend’s dad. Her family took me with them on vacations to Lake Tahoe. Even though I have a wonderful father, my friend’s dad was such a positive role model and, really, a second dad figure in my life. It felt important to thank him for those experiences and as I wrote it, they were such good memories to relive. He wrote back with the sweetest response and a funny p.s. saying it was OK if I started calling him by his first name, no more “Mr. ____.” It still surprises me how much it means to someone to be thanked.

It must really stand out these days: a handwritten “thank you” found in your actual mailbox.

It really does. I think people overestimate the awkwardness of expressing gratitude and underestimate its impact.

Do you have any tricks for starting this “thank you” practice and sticking with it?

Definitely! I set it up to be a pleasurable experience so I enjoy coming back to it. I love having a beautiful address book…instead of just a list of names…and a stack of pretty stationery is so motivating. A great pen, too, and a space set aside for writing. There’s a bit of ritual to it, and I like that. As for sticking with it, I have a “no agonizing” rule! I cannot overthink what I’m saying or make it bigger than it is. You’ve got to keep it easy and doable. And it’ll be worth it.

We hope, like us, you’ll give Gina’s Thank You Year a try—even if that’s just one letter every month this year. And maybe you, too, will experience the simple joy that comes with a heartfelt “thank you.”

Gina’s Top Tips for a Practice in Appreciation

Does lighting a candle instantly bring you a sense of calm? Or maybe you find words flow best when you’re using your favorite pen. Find the trigger that will put you in a mindful mood and make sure it’s easily accessible. Oh, and don’t forget that handy stack of pretty stationery!

From favorite authors to career mentors beginning with a theme of recipients helps to create parameters and removes the overwhelming feeling a blank card can hold. If those groups seem too far-reaching bring it back home by writing to your significant other or neighbors who have gone above and beyond.

Being specific is what makes a good letter work according to Gina. Start by thinking of just one thing to thank a person for. One thing they said or did or an experience you two shared. It gives you a good jumping off point and makes writing those first words a little less daunting.

There’s an aspect of vulnerability to letter writing and Gina encourages us to embrace that. In fact, overcoming that squirmy feeling and coming out brave on the other side is one of her favorite parts of this project.

“It still surprises me how much it means to someone to be thanked.” Gina reminds us it doesn’t have to be perfect or eloquent, just sincere. Trade a few minutes admiring other people’s lives on social media for a handwritten thank you note honoring what it is you do have.

You can follow along with Gina @THANKYOUYEAR and if you decide to give this practice a try tag us @CRANEANDCO —we’d love to encourage you on your journey. 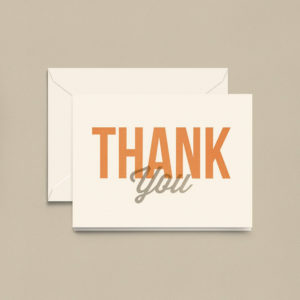 Tips for Hosting a Wonderful Friendsgiving